Hop on the Christmas Sleigh of Kindness and Let Goodness Lead the Way! 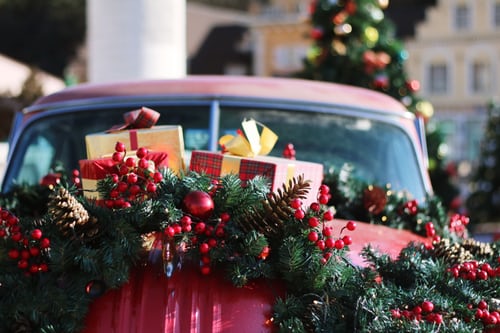 23 Dec Hop on the Christmas Sleigh of Kindness and Let Goodness Lead the Way!

When the familiar winter wind begins to wrap around you when each shop is adorned with beautiful decorations of red and green and when the radio starts to play ‘Feliz Navidad’ on loop, you know it’s that time of the year. It’s Christmas time! Time for kindness and goodness to lead the way.

The word ‘Christmas’ rings so many bells (pun intended). It brings in its fold the gigantic Christmas trees embellished with twinkling lights, the delicious cakes and cookies, and the rhythm of Christmas songs which usher in the spirit of joy and celebration. However, while living in a society propelled by consumerism, it’s quite easy to lose track of the true essence of the yuletide spirit in the foggy madness of holiday shopping and feasting.

Christmas is the celebration of the human spirit. A time to remind ourselves of the abundant good that flows through the world yet often remains hidden in plain sight. At its core, this blessed day stands as a reminder for us to recognize the beauty of our beating hearts and to let the spirit of kindness flood the entire world. The world is filled with kind people who are ready to don Santa’s cap and light up the lives of others. A little digging is all you need to hit upon a treasure trove of beautiful stories that reaffirm your faith in humanity and inspire us to tread the path of goodness.

So, find a cozy spot (maybe near the fireplace?), get yourself a warm cup of cocoa, and get ready for a heart-warming ride. Here are some stories of kindness that are sure to make you smile.

Kindness from a stranger with a heart of gold

Connie Hammis shared a poignant story on Quora, recalling how a complete stranger brightened her Christmas and brought joy to her little boy. Read this beautifully written heart touching tale –

“Not enough years ago, I was sitting outside my second-story apartment on the stairs outside my door. It was late on Christmas Eve. My son was five years old. I was crying.

For his birthday, I had been creative and bought drinks and cookies and some little gifts and wrapped them in foil to disguise the sad truth that I couldn’t afford real gifts.

I was pretty good at getting creative to hide my financial stress from my son. He loved his giant robot so much, he didn’t want to take it apart to get his gifts, at first. But, by the time Christmas rolled around, I was so run down, so sad and broke, that I couldn’t find the strength to do something that creative again.

So, I sat outside, trying to hide the choking sobbing tears, afraid of disappointing my sweet, sweet son on Christmas morning. Then, out of the dark, someone very quickly ran up to my steps and threw two large black trash bags on my landing, then ran away.

I was too sad even to be startled. In fact, for quite some time, I just sat there staring at the bags. After a while, I uncurled my legs from under my chin and peeked into the bags. There were gifts and gifts and gifts for my son and for me. Beautifully wrapped.

I cried even harder and felt so undeserving, but so relieved and happy at the same time. It took me an hour to gently remove each gift and place them under our tree. The sweetest part was my son. He was, of course, thrilled to open his gifts, but more than that, he was happy for me. He had never seen me receive a gift, ever. He was more thrilled to open my presents with me.

I still have no idea who could have given me the gifts. I had no close friends or neighbors. I worked hard at my job to hide my struggles, and my family is not close. I did not have a church or any other connections. To this day, I wonder what angel came and gave us those gifts. And now, any time I have anything extra, I am generous, and everyone in my family does Christmas Angels… but I can never repay the kindness I needed so badly in that night of utter despair.”

Source: Has it ever happened to you that a complete stranger reached out to help you in some big way? What is your story?

This is a story of kindness that comes from the pages of history. A testament to the spirit of kindness in the most testing situations.

The white snow stretched far and wide in the Ardennes Forest. Three American soldiers who had been drafted to fight the battle of Bulge in 1944, found themselves lost in the heavy snow. They hadn’t even set foot on the threshold of adulthood, yet circumstances had landed them into the lap of difficulties.

One of the soldiers was wounded. All three of them were starving and desperate. After walking for a while, they stumbled upon a cabin in the woods. It belonged to a German lady called Elisabeth Vincken, who lived there with Fritz, her twelve-year-old son. On hearing the knock, she opened the door to find three American soldiers. She was startled at first, but on noticing that they were only a few years elder to her son and one of them was injured, she invited them inside.

On learning how famished the soldiers were, she began preparing a delicious meal for them. Just when the aroma started to waft through the house, there was another knock on the door.

Elizabeth was shocked to find four German soldiers at the door, one of them being a Corporal. She feared for her life. Would these soldiers punish her for giving shelter to the Americans? Would they kill the young soldiers waiting inside? These questions raced around in her mind as her heartbeat quickened, and her pulse throbbed away. When the Germans asked her for help, since they were lost and weary too, Elisabeth blurted out that there were three American soldiers inside. What followed was a cold, long stare and a few words that incited a sigh of relief.

“There will be no shooting on the Holy Night.”

The soldiers shared roast potatoes, soup, and jokes (no war strategies, though). Keeping their enmity aside, one of the German soldiers tended to the injured soldier. The next morning, the German soldiers helped the American soldiers to draw a map back to their camp and also gave them a compass. Elisabeth marveled at the exchange of kindness that had taken place while she bid farewell to both the groups.

In 1996, several years after this incident, Fritz reunited with one of the American soldiers. Yes, he still had the map and the compass with him. A cherished memory of the kindness practiced in troubling times.

Source:  Christmas at war: A cabin in the Hurtgen Forest | Legion Magazine https://legionmagazine.com/en/2018/12/christmas-at-war-a-cabin-in-the-hurtgen-forest/

An extra mile for kindness

The night had begun to grow darker; the wind was bitterly cold, and the rain was bucketing down. It was quite clear that people were rushing home, hoping to escape the miserable weather. Still, one person discovered the opportunity to practice a random act of kindness. Read this story shared by a user on the Black lotus app:

“In the late evening, it was raining heavily. I was driving back home from work. Everyone seemed to be in a hurry to reach home, including me. Most of the people were in cars, and those who were walking had umbrellas over their heads. When I took a turn from the main road into the service lane, I saw a man in a security guard’s uniform, walking in the rain without an umbrella. I felt sad seeing the person walking all alone, without an umbrella in the pouring rain.

I drove near him and requested him to sit inside the car. He was slightly surprised but immediately jumped inside. He smiled and thanked me profusely. He was an old man and was carrying a heavy bag. One of his hands was shaking continuously, and on enquiring, he told me that he had Parkinson’s disease. I was deeply moved by his struggles. I asked him about his home. He told me he lived in a nearby village. He had forgotten his umbrella, and he wasn’t able to get any public transport back home.

Initially, I had planned to drop him somewhere close so that he could take some transportation back home. But then I decided that I should go the extra mile and drop him home. He was beaming with happiness as he thanked me profusely and smiled in spite of having gotten wet in the cold weather.

This warmth that kindness provides fills our heart with satisfaction, love, and contentment.”

I hope these stories have inspired you to perform a few random acts of kindness (Raks) this Christmas. If you are confused or don’t know where to begin, here’s a list of 25 little kind acts you could perform on the 25th of this month and then continue doing them throughout the next year and the entire decade!

You can read many more inspiring stories on the Black Lotus app and share your stories of kindness too! Make this Christmas a day to celebrate the spirit of kindness!

Wishing you a very Merry Christmas from all of us at Black Lotus!