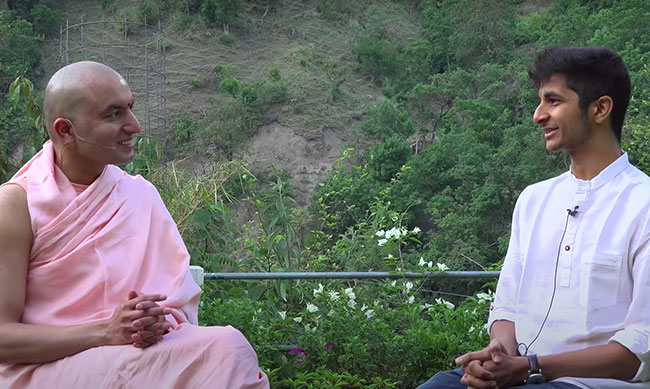 Posted at 18:20h in by BlacklotusApp_HP 0 Comments
0 Likes

What happens when the two best of the very best in their respective fields meet? Well, they find common ground for the greater good. And that is exactly what transpired between Grandmaster Vidit Santosh Gujrathi, India’s Chess No. 2, and Om Swami, Founder of Black Lotus, the fastest-growing meditation app in the world.

On numerous occasions, Chess Grandmaster Vidit has brought our country laurels by winning many international tournaments. Currently ranked 23rd in the world, he is only the fourth ever Indian to cross an ELO rating of 2700. He is leading India at the ongoing FIDE Online Chess Olympiad.

“It was a no-brainer for me,”  Mr. Gujrathi said. “When the Black Lotus team presented me with the opportunity to be one of their brand ambassadors, I knew my decision right away. And that’s because I have been using this app for the last two years and it has helped me immensely. I share a bond with the Founder of Black Lotus, Om Swami, and have read all his books. Like Om Swami, Black Lotus stands for truth and the world’s best meditation.”

The terms of the deal are undisclosed but it is a substantial 5-year endorsement agreement done in a combination of stock and cash. Black Lotus app has more than 50,000 installs in a short span and has 15,000 serious meditators who actively use this app. With a rating of 4.9, the app has over 2000 5-star reviews in the app stores.

“Chess has always been close to my heart,” said Om Swami. “So much so, I even wrote a work of fiction, The Last Gambit, centered around chess. When I met Vidit last year and found out that he was an active user of Black Lotus, I knew that one day whenever we could afford, the sharp and brilliant Vidit was just the person I’d like to sign up for Black Lotus. He represents what Black Lotus stands for, that is, serious meditation, humility, and unparalleled competence.”

Black Lotus app was officially launched three years ago, however its much-loved self-transformation framework called RARE has just been introduced. By devoting just 16 minutes a day, backed by neuroscience, subtle but noticeable changes begin to take place in a meditator’s brain making them sharper, more focussed, and less stressed.

A number of studies conducted on Om Swami’s brain show phenomenal insights into the power of intense and correct meditation. In fact, on the company’s website (www.blacklotus.app), there is a remarkable video that shows Om Swami’s brain imaging in comparison to an average meditator.

“I created Black Lotus so people may benefit from correct meditation. I have devoted more than 15,000 hours to meditation and we understand it better than the best out there. And don’t take my word for it. See the overwhelming scientific evidence we have,” says Om Swami, who is not just the Founder of Black Lotus but also a bestselling author of fifteen books on meditation, spirituality and wellness. “In chess, I’m glad that Vidit has beaten some of the finest players. In meditation, however, we are unbeatable. In fact, when it comes to meditation, none of the well-known apps even come close to the truth. If you want fun meditation, there are many apps but if you are serious about meditation, there’s nothing better than Black Lotus. Simply put, your mind is our business and we do it well.”